with the medieval French battle town of Crécy-en-Ponthieu

How it all began …

In 2013 the choir visited Abbeville and Crécy-en-Ponthieu to forge friendship between the towns of Llantrisant and Crécy and as a result of this long-standing connection between the towns, our Chairman, Ted Tidman, supported by our Vice President, Geraint Hughes and the Llantrisant Community Council instigated a ‘Friendship Agreement’ with a charter signed in the Llantrisant Guild Hall on 1st March 2015. Since then regular formal exchange visits have been undertaken spearheaded by the choir. 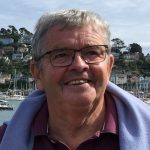 “Decisions of importance are often the result of a chat over a pint of beer!”

It was back in 2012 and Llantrisant Male Voice Choir were looking for a venue for their annual overseas tour. I was approached by Ted Tidman and he asked me for any ideas I might have for a tour to France. Having connections in the Picardy area and aware of the long-standing history between the Black Army and the people of Crécy-en-Ponthieu, I suggested that a week-end in northern France could be a possibility.

After much deliberation and organisation on both sides of the Channel, two concerts were arranged, one in the town of Abbeville and the other in Crécy itself. The choir excelled with two outstanding performances that were much appreciated by the respective audiences.

Staying in this part of France offered choir members an opportunity to visit the battle-fields of the 1914-18 Great War in Flanders. The most moving moment was at the monument to the fallen 4000 Welsh soldiers killed at Mametz Wood on the Somme.  A wreath was laid at the monument to the ethereal strains of O Iesu Mawr, rho,d’anian bur’ and to a full, hearty rendition of Hen Wlad Fy Nhadau. Goose-pimple stuff indeed!

During the visit the idea of twinning the two towns was mooted and the idea received support from both parties. On 1st March 2015 a delegation from Crécy arrived in Llantrisant to sign a Charter of Friendship between the two towns. Celebrations to mark the signing were organised and the choir featured prominently throughout the weekend.

There have been several reciprocal visits in the last few years in the hope of nurturing a lasting relationship between the two communities and Llantrisant Male Voice Choir has played a significant part in creating this bond.

The choir is steeped in the tradition of 130 years of music making by the men of Llantrisant. That Welsh tradition is at the heart of all that they do to this day. One cannot but amaze at the enthusiasm, commitment, energy, camaraderie and no small musical talent that is the hallmark of Llantrisant Male Voice Choir today.

They are brilliantly led by the exuberant and talented musical director Matthew Nash and all held together by solid and unflappable hand of their industrious chairman Ted Tidman.

I’m not sure who paid for that initial pint in the Cross Inn which instigated all these comings and goings, but I am, along with our French friends, immensely grateful to Ted for opening our eyes and ears to the wonderful talent of this group of men! 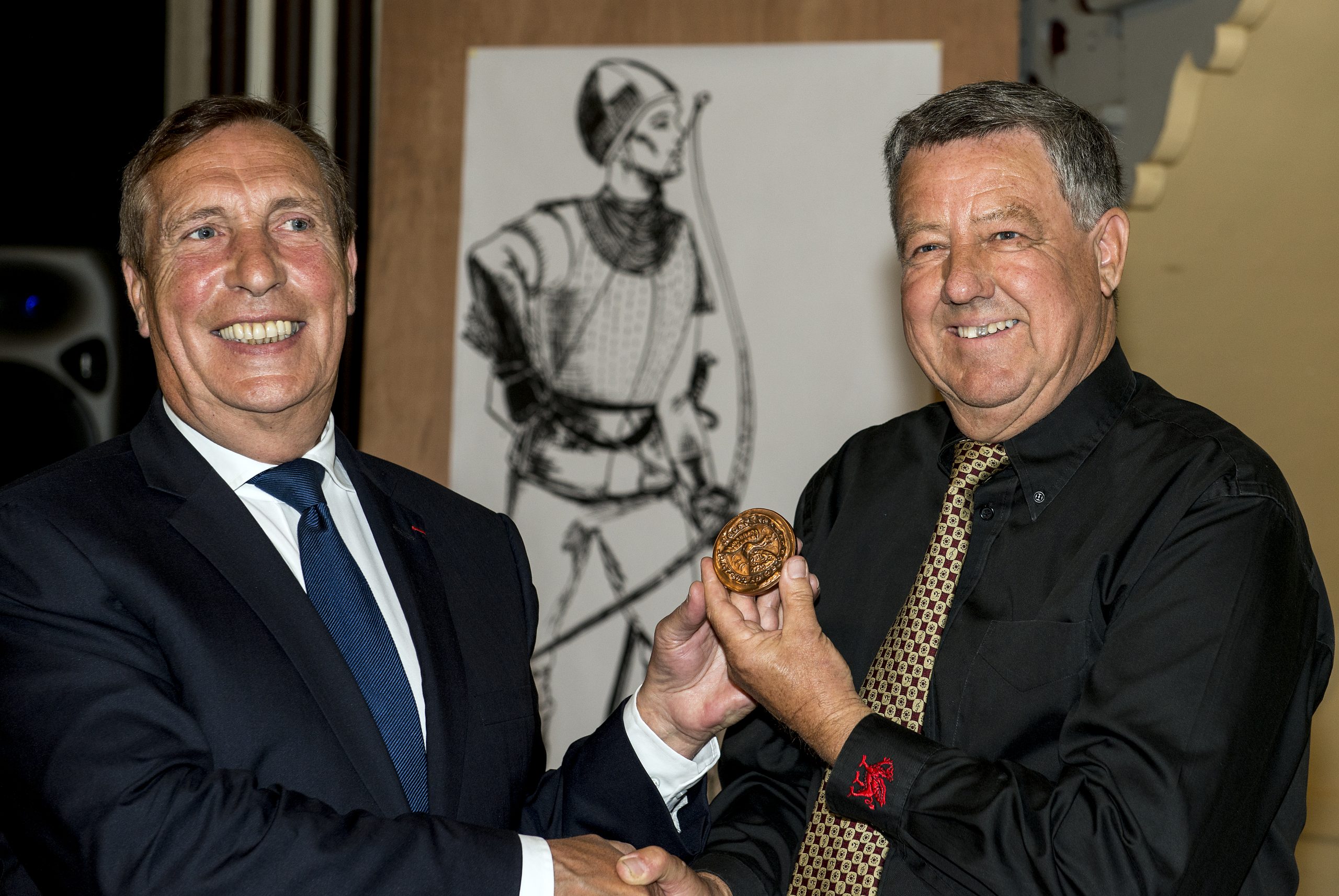 Presentation of the Council Medallion

Reges Lecuyer, Mayor of Crécy presenting the Medallion to Ted Tidman at the Crécy-en-Ponthieu Village Hall. This was the first step taken towards the formal Frienship Agreement signed in 2015. The bronze medallion, made by the council is presented to official visitors. 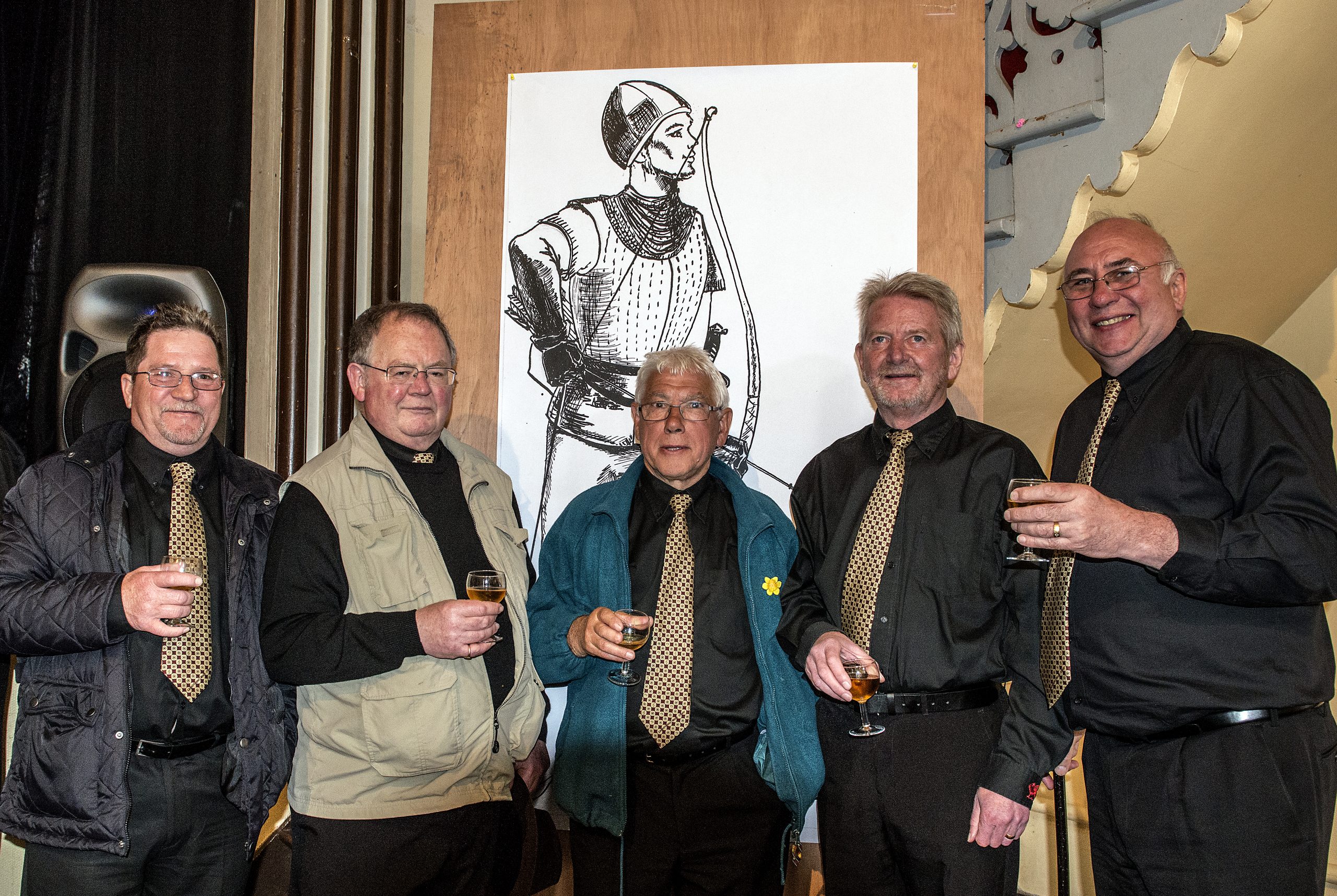 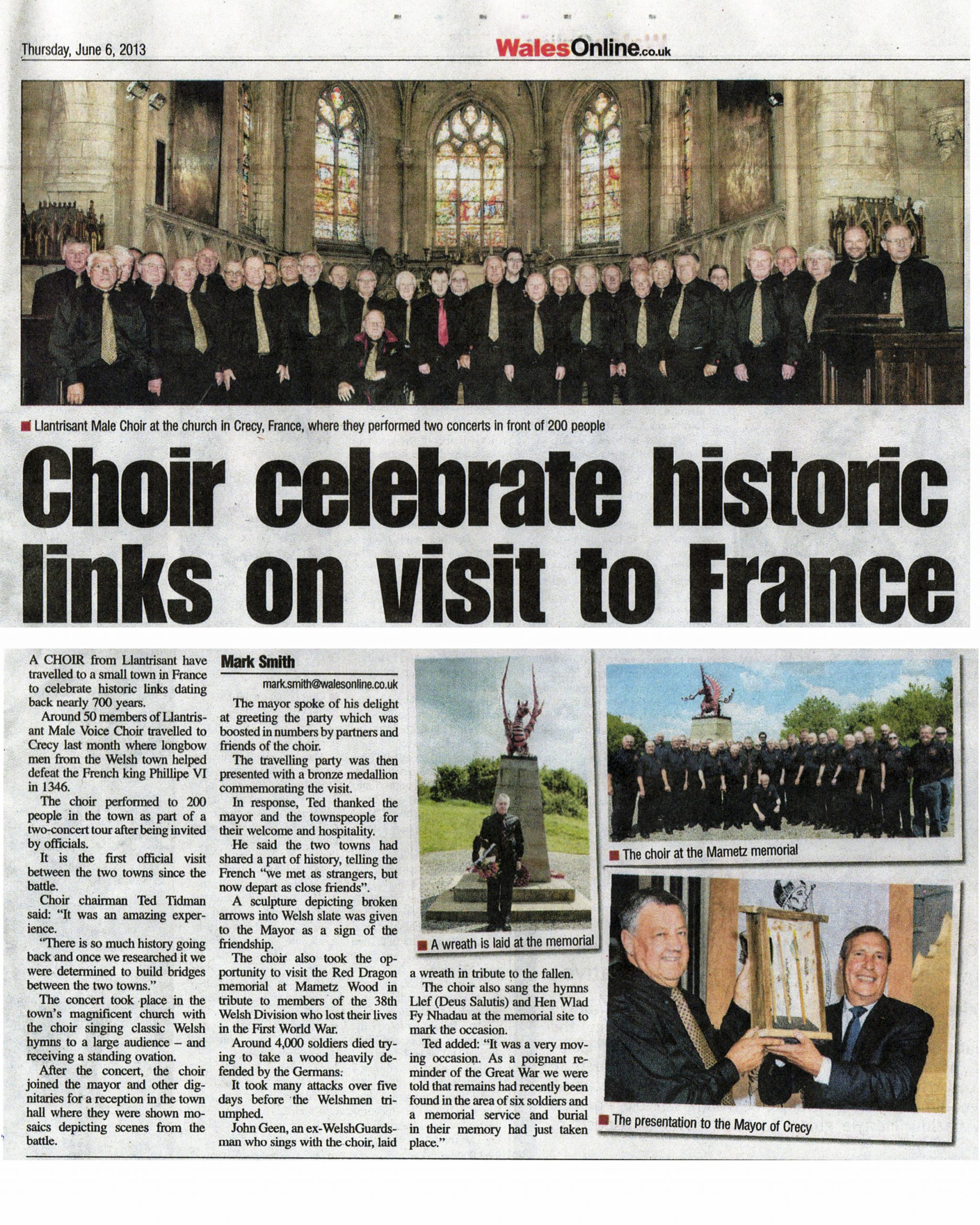 Celebrating the 1st official visit by a Llantrisant organisation since 1346 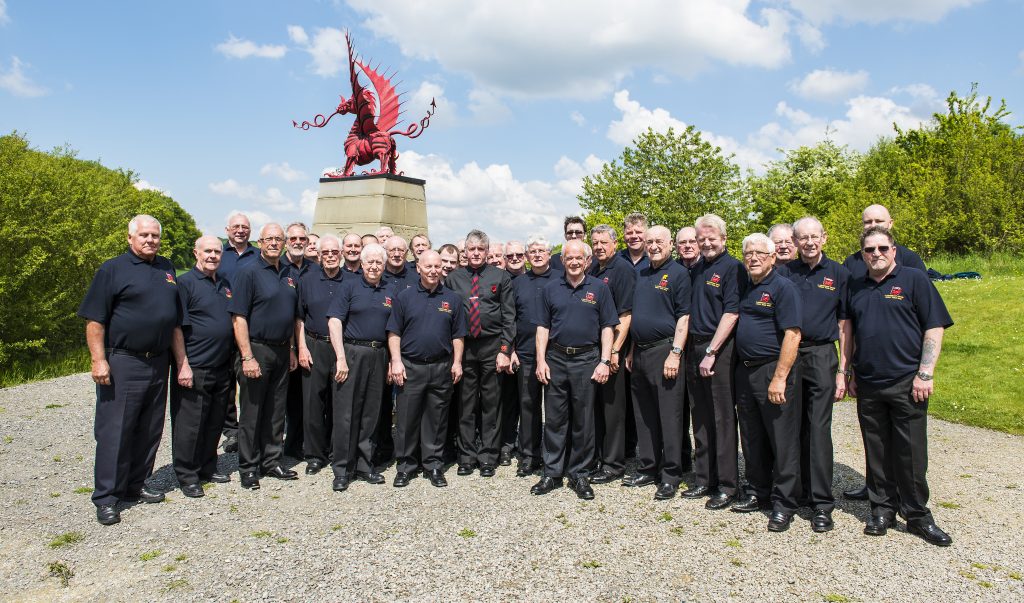 The Welsh Dragon Memorial, erected in 1987 commemorates the first Battle of the Somme in 1916 and the engagement of the 38th (Welsh) Division of the British Fourth Army. 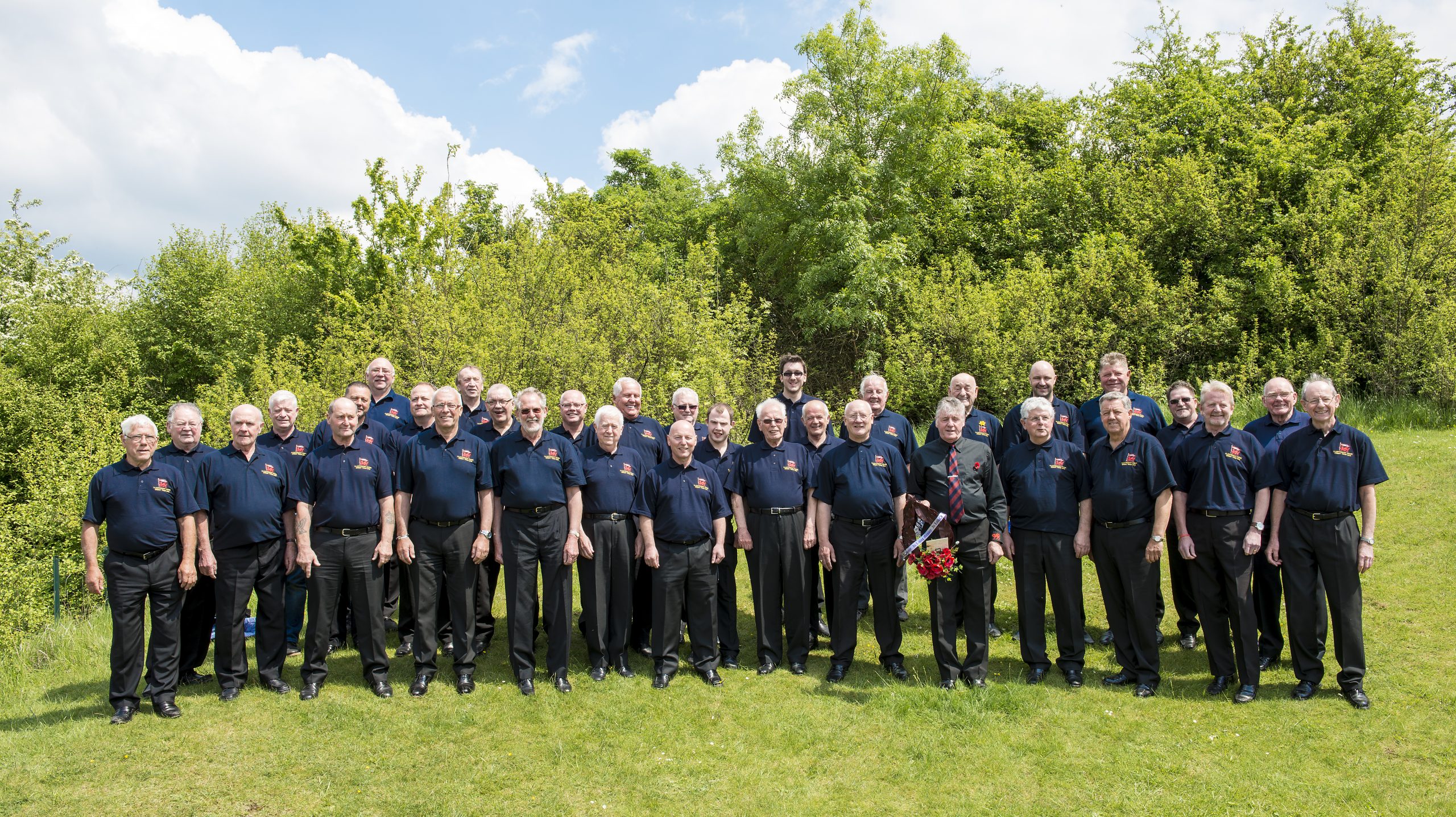 Official Signings of the Friendship Agreement

Signing of the Friendship Agreement 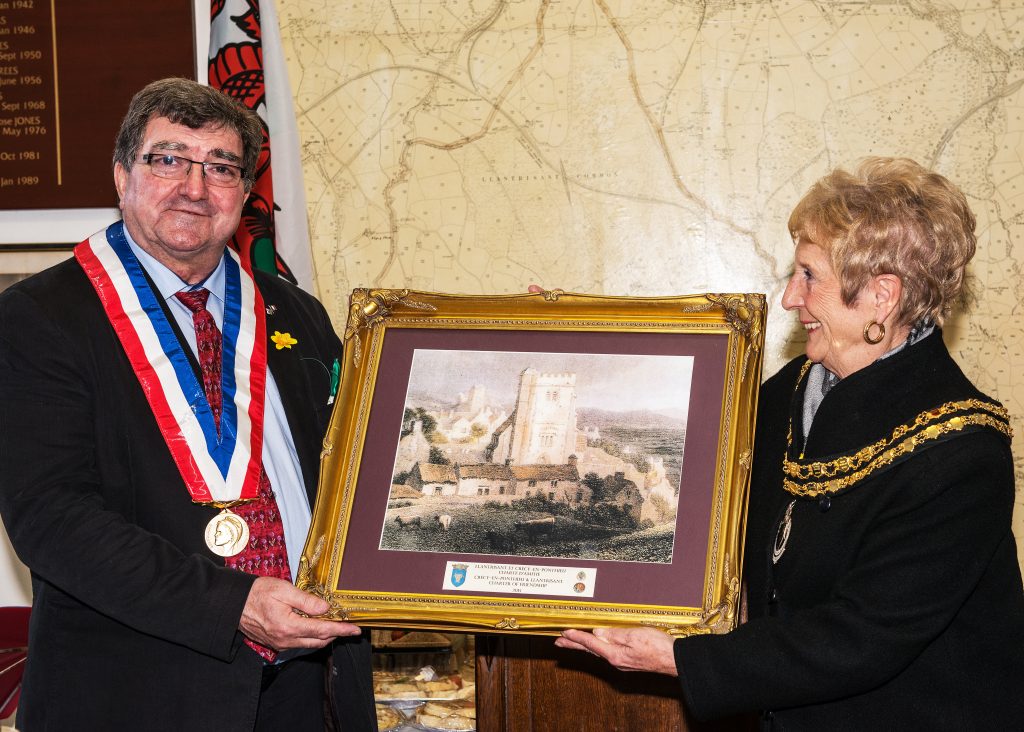 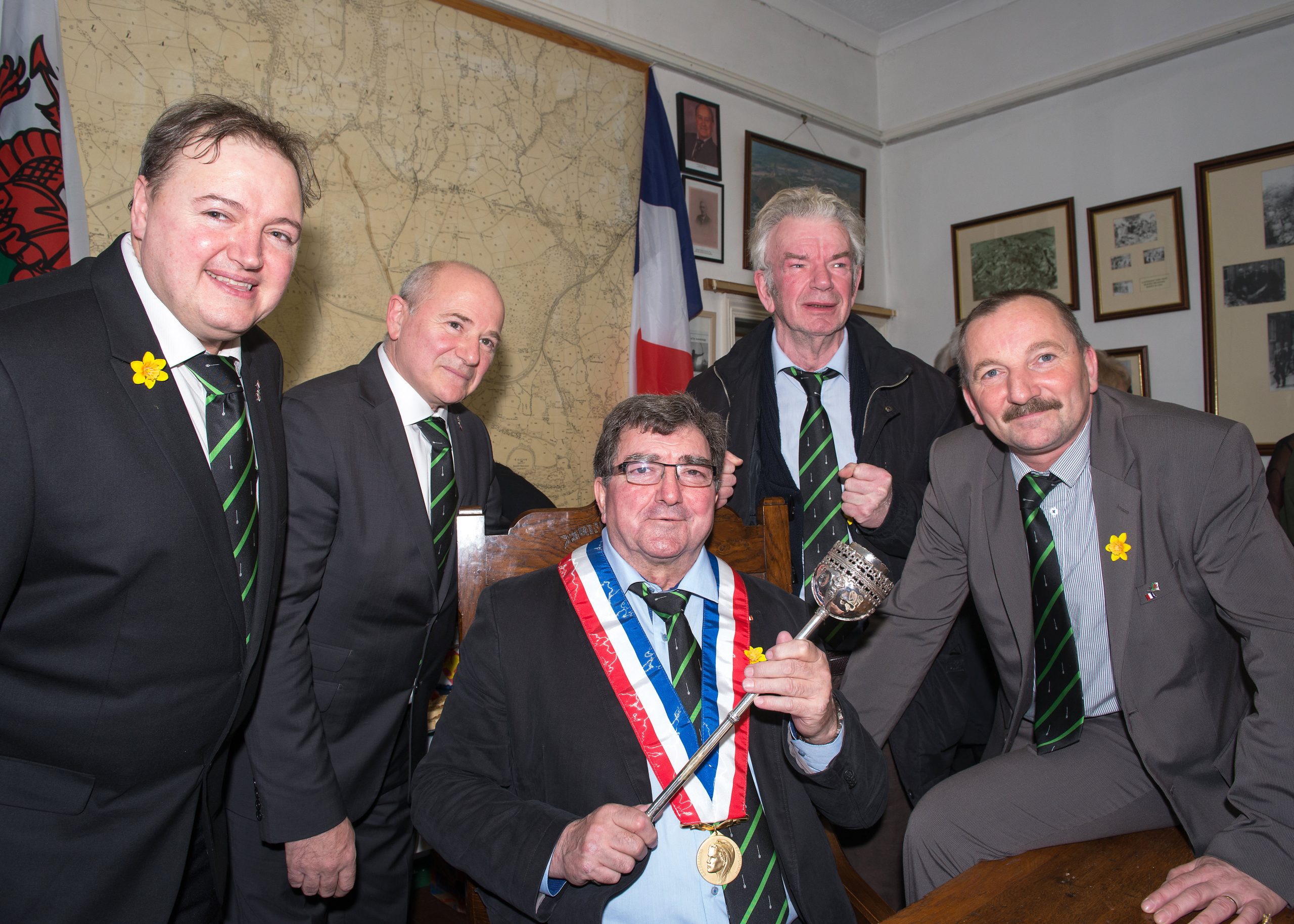 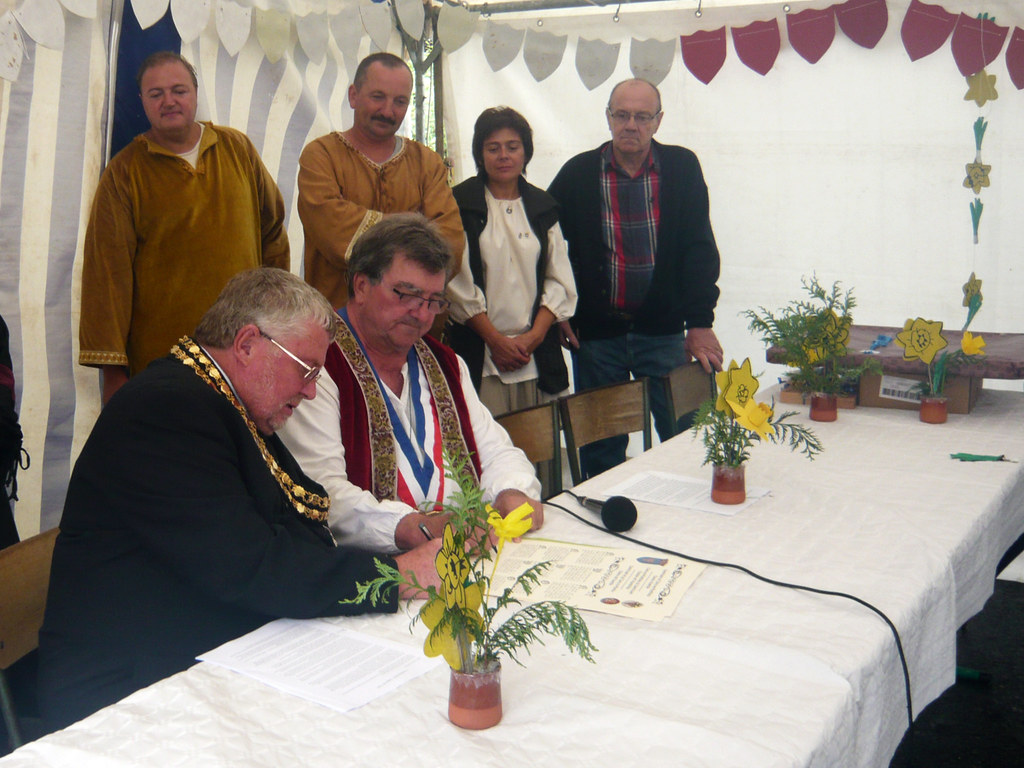 Signing of the Friendship Agreement August 2016

A weekend of local celebrations to mark the twinning 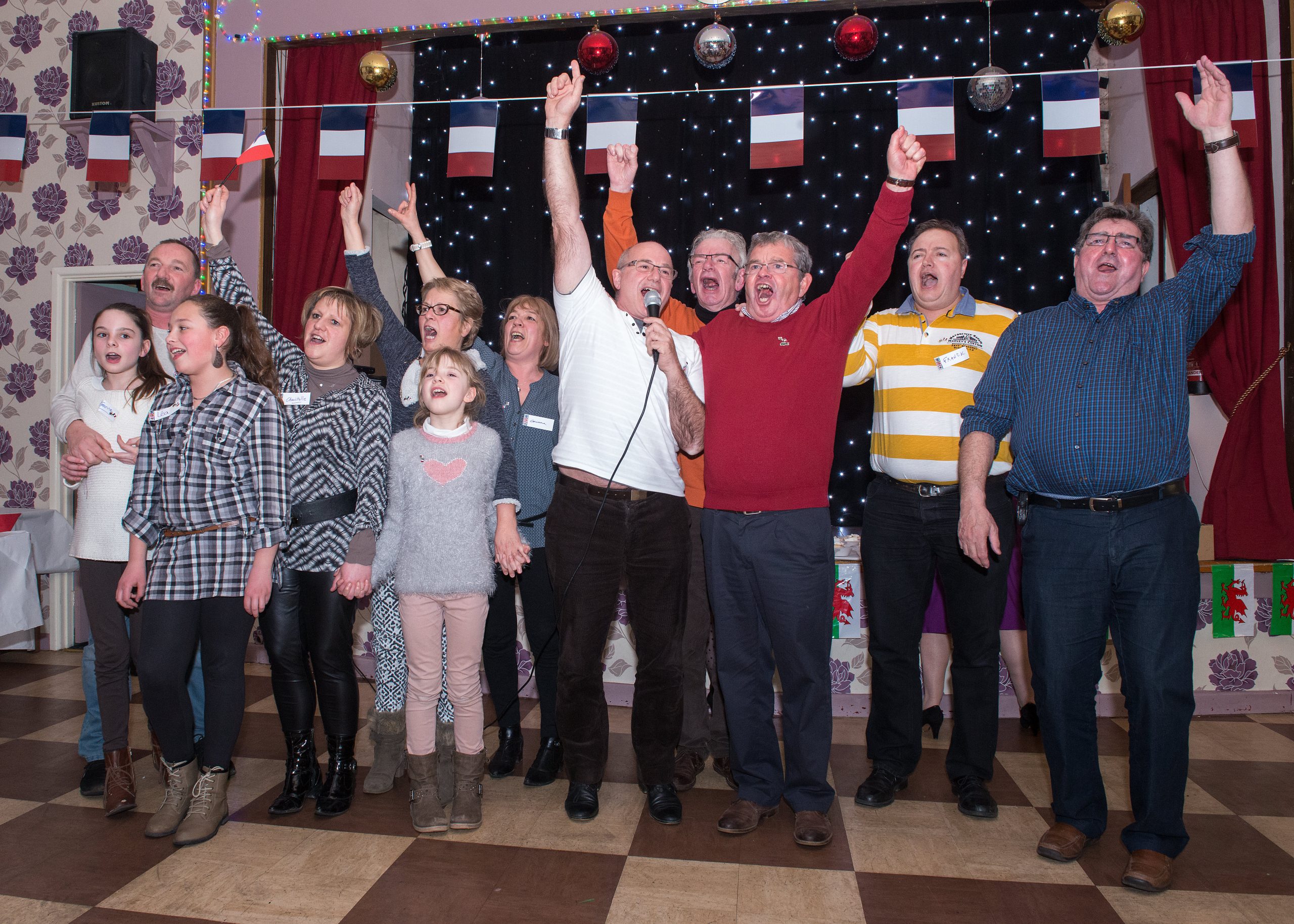 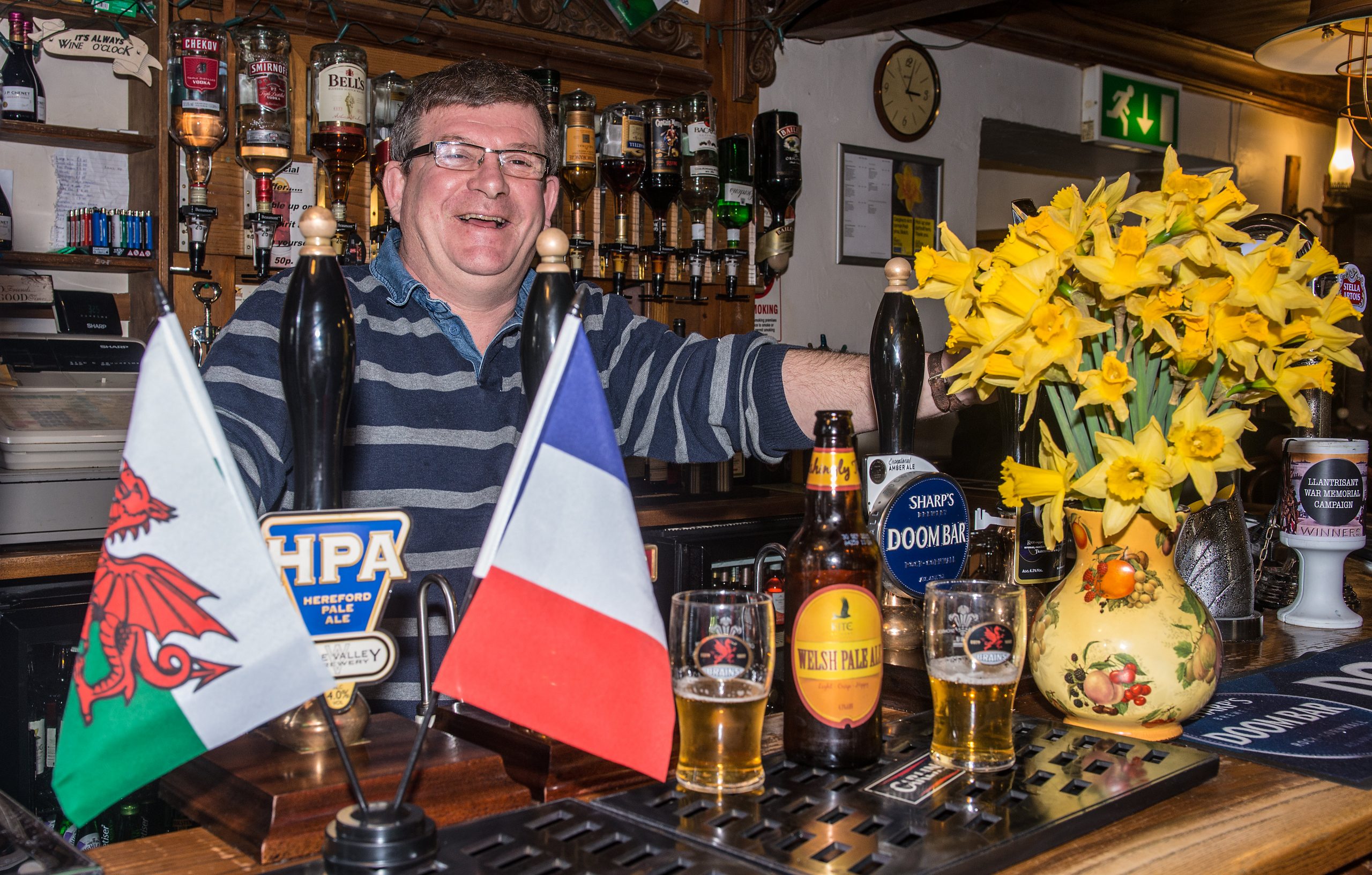 The Battle of Crécy, was an important English victory during The Hundred Years’ War.  It was said that the Welsh longbowmen, under the command of Edward the Black Prince (created Prince of Wales in 1343) had played a pivotal role in acheiving this. 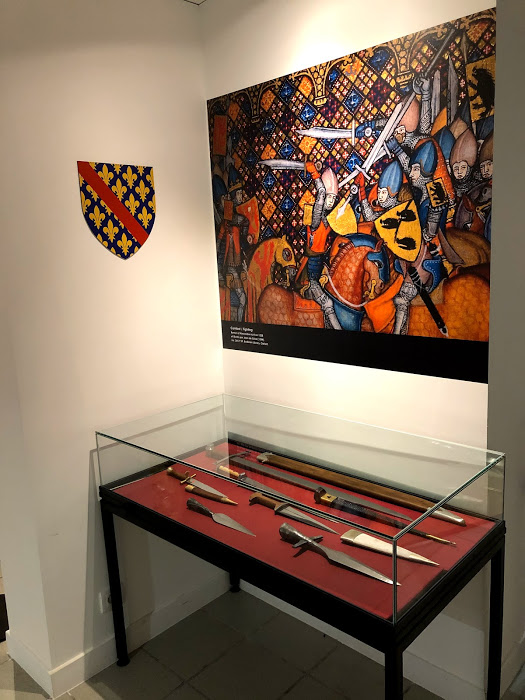 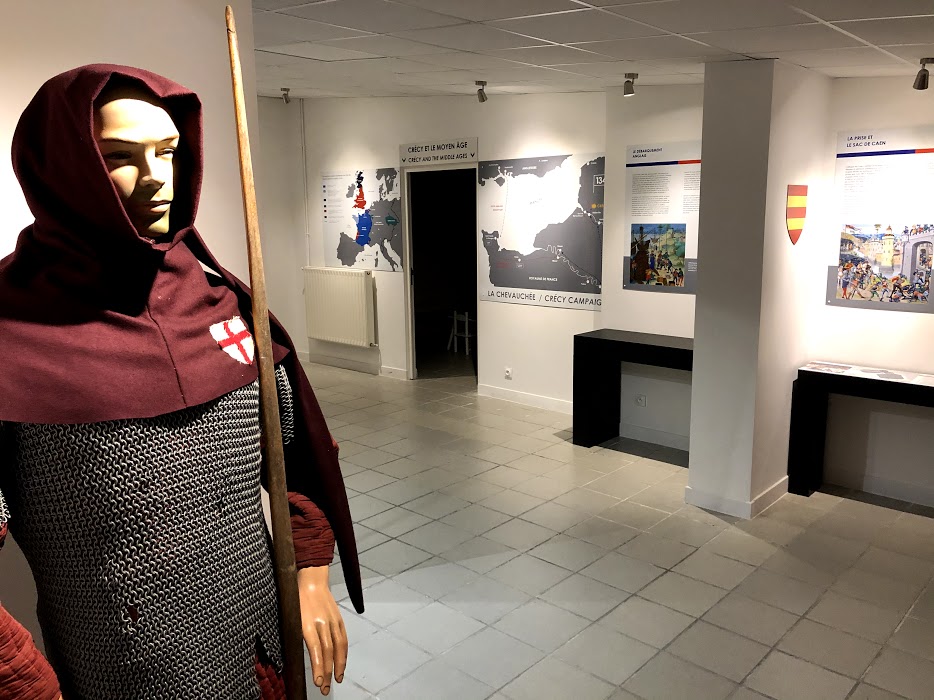 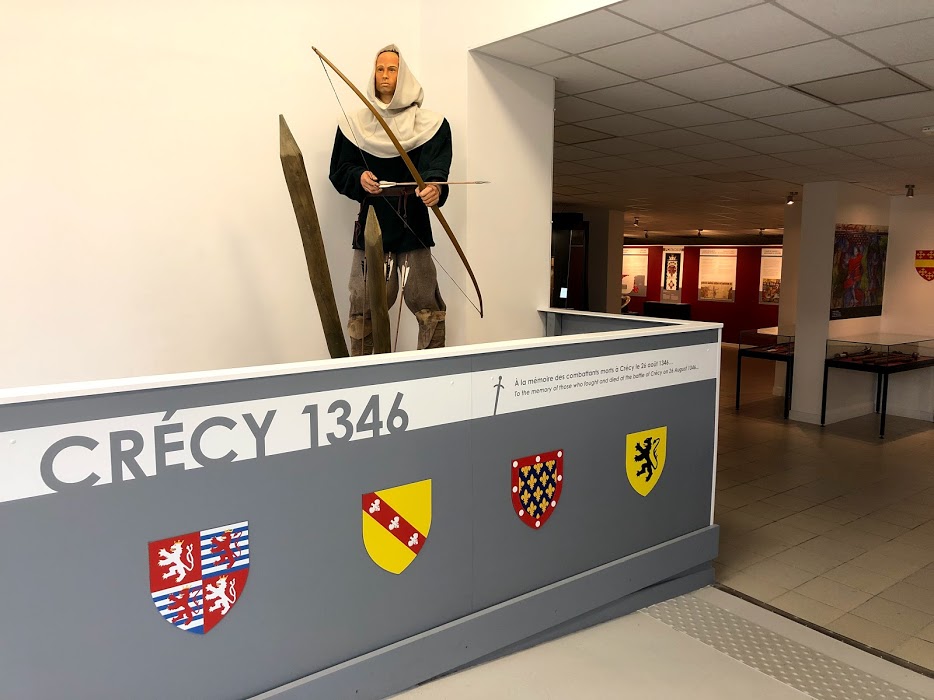 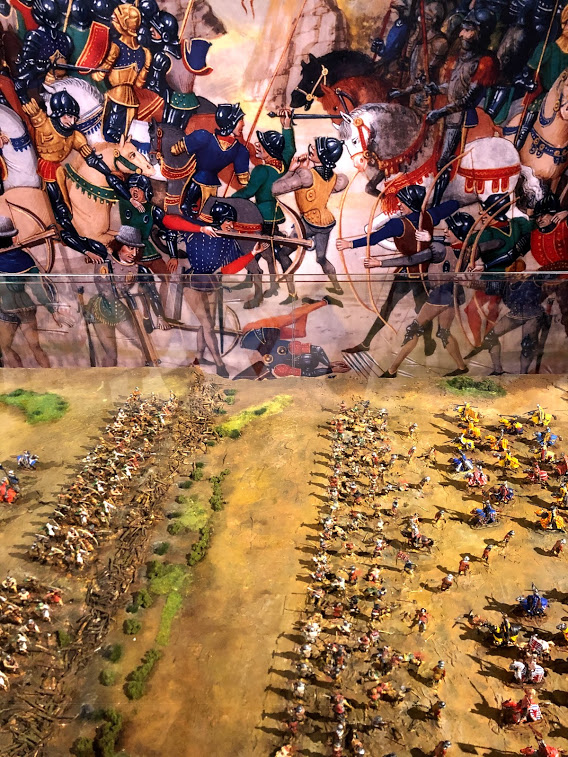