Held on Friday 14th October 2022 in our home base at The Workingmen’s Club, Swan Street, Llantrisant. 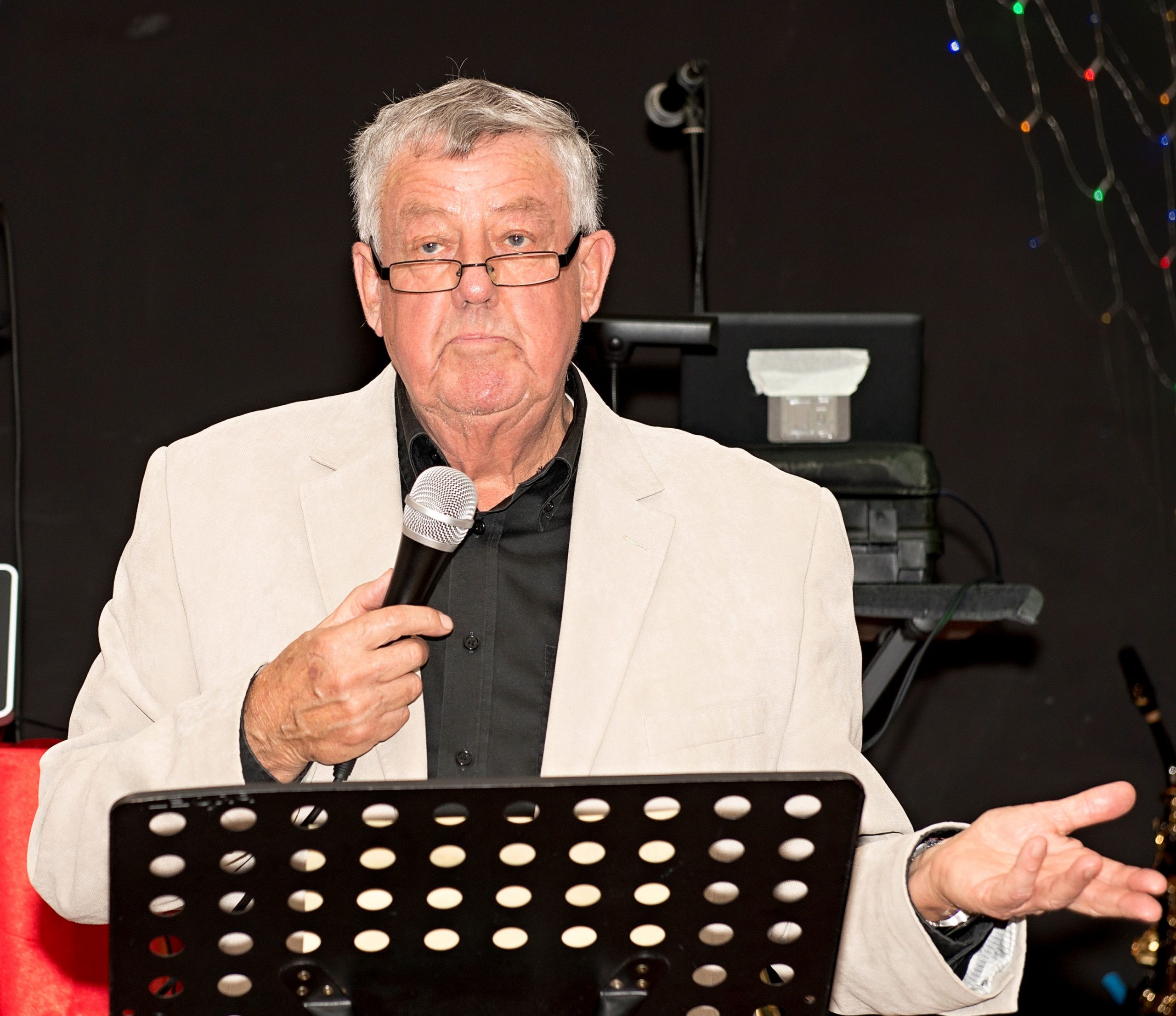 As Master of Ceremonies, Ted thanked everyone for coming along to the evening, and without further ado, introduced the three choristers to be presented with their richly deserved special award:-

“Tonight is all about honouring three dedicated and loyal long-serving choristers receiving special awards for their services to the choir.

“Firstly, I’d like to say a few words about Haydn,  highly regarded by all choir members as the ‘Father of the Choir’.

An Electrical Engineer for the National Coal Board, Haydn joined us in 1972 as a Second Tenor, with 50 years of continual service to date.

Haydn also became Treasurer for 17 years and as Treasurer, did a grand job by keeping excellent records and just as importantly ….  keeping tabs on all the boys!

And now, at the truly remarkable age of 88 years, Haydn is as passionate about singing as he was all that time ago.

His other passion is rugby, goes without saying that Haydn’s a huge supporter of our national side and possibly an even greater supporter of Pontypridd Rugby Club”.

“And Eddy,  a quiet man, fondly known throughout the choir  as ‘Mr Reliable’ and lately I’m hearing ‘Steady Eddy’ as well …

From a family of musicians Eddy was also a member of two youth brass bands playing the euphonium.

Eddy joined us in 1970 and has reached 52  years of continual service as a Baritone.

As a BBC sound engineer for over 40 years Eddy is the ‘go-to’ person within the choir for all the technology driven stuff few of us understand.

“Last but certainly not least, Jeff, a Top Tenor who joined the choir in 1997 achieving 25 years of loyal service and loves touring with the choir and is looking forward to our Malta visit in 2023

Having a wonderful singing voice clearly runs in the Davies family as Jeff’s father Haydn, was also a Top Tenor soloist for our choir.
Jeff is a Painter & Decorator, well respected within the local community for his expertise and professionalism.

We are very thankful to Jeff who selflessly gives his time, effort and the use of his own van, to move equipment back and forth engagements. Jeff is an extremely vital and valued member of the logistics team.

We also owe a debt of gratitude to Jeff for introducing to the choir, Mario Lombardi who became our Choir President”.

And now a few words from the boys …… 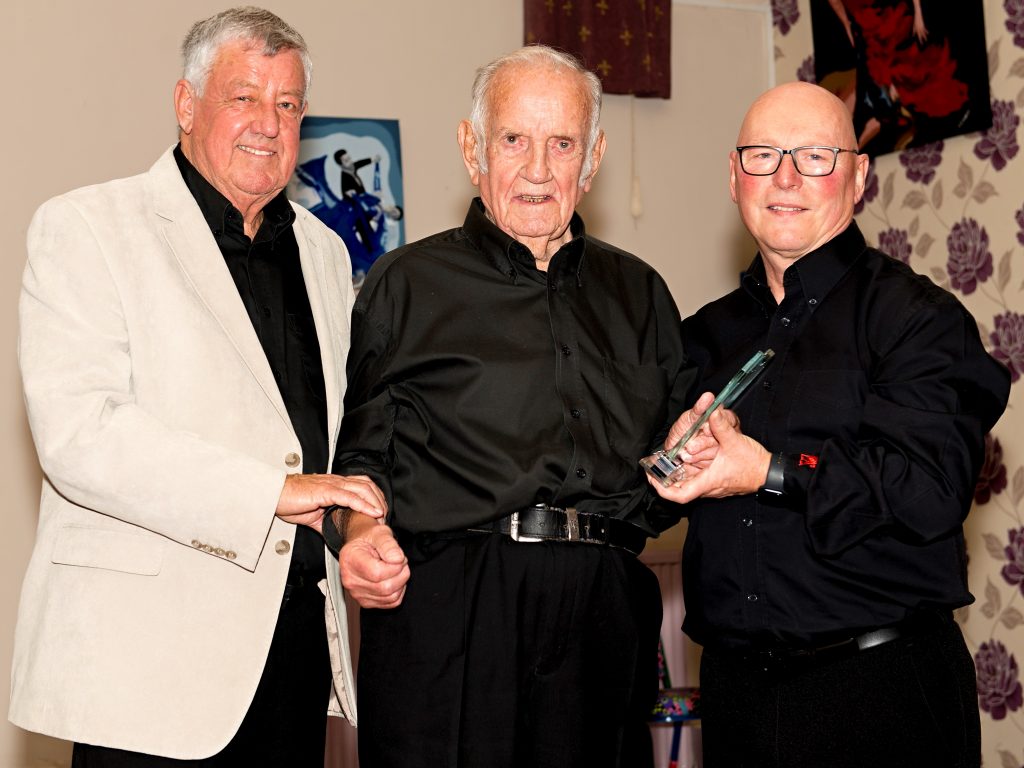 “I was born in Ynyswen, a village in the community of Treherbert, Treorchy, Rhondda Cynon Taf, to a family where choral music was deeply embedded throughout many generations of male voice singers. My father, brothers and uncles were all members of the Treorchy Male choir.

I’m told I could be heard singing traditional Welsh hymns from a very young age. Llef (‘A Cry’) is a very popular Welsh hymn and is still my favourite hymn to sing. So it was inevitable I would join a choir and in 1972, I did just that when I joined LLantrisant Male Choir as a second tenor. I also held the position of Choir Treasurer for 17 years which I really enjoyed. I married Beryl, in 1958 and our son was born in 1966. We have lived in Tynant for 55 years.

In 1995, I was presented with the Ivor Thomas Memorial award for best attendance which was followed by a Life Member award in 1998. I am very proud of both achievements. Throughout my fifty years of loyal service, I helped organise national and international tours with regular concerts at the Royal Albert Hall, London, the Cyprus Centenary, Bratislava, Krakow and Nürtingen, and I went on tour many times”. 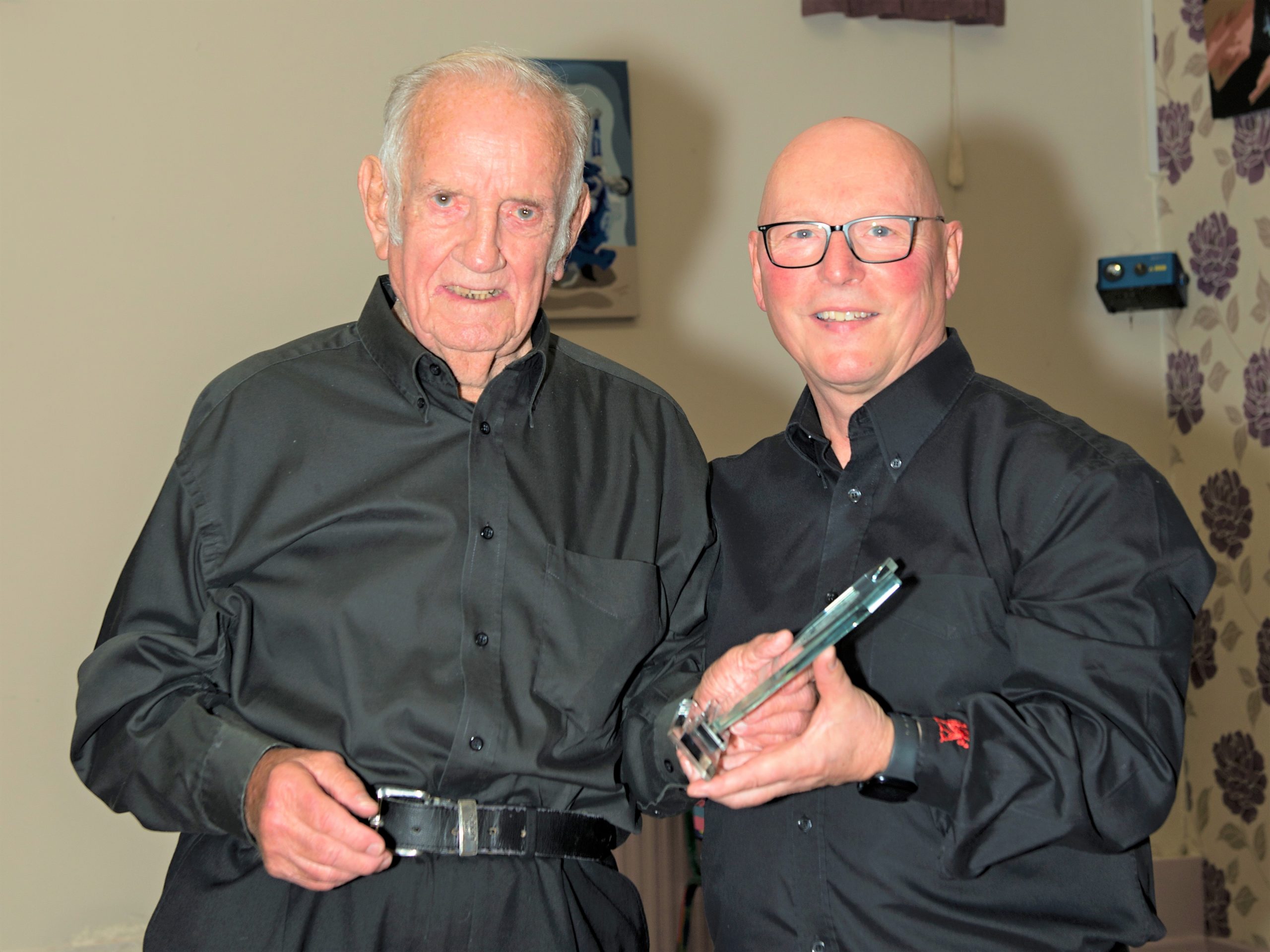 “I joined the National Coal Board in 1951 when I was 17 years working as a trainee electrician at Parc Colliery, Cwm Parc, Treorchy.

I moved to Fernhill Colliery, BlaenRhondda as assistant unit engineer and on leaving there I undertook a three-year Electrical Engineering Management course working in coalfields at home & abroad. After three years studying, I accepted the position of deputy unit engineer at Cwm Colliery in Beddau, prior to taking on the senior role as unit electrical engineer.

When the pit closed in 1986, I was retained for another year whilst the colliery was being dismantled and I finally retired in 1987, having proudly served the National Coal Board for more than thirty-six years”.

Following a lifetime of work in the collieries, I developed Asthma and I’m convinced singing helped me manage my condition. I’d advise anyone with asthma to join a choir!”

“We all make decisions every day of our lives but the best decision I ever made was to join the choir”. 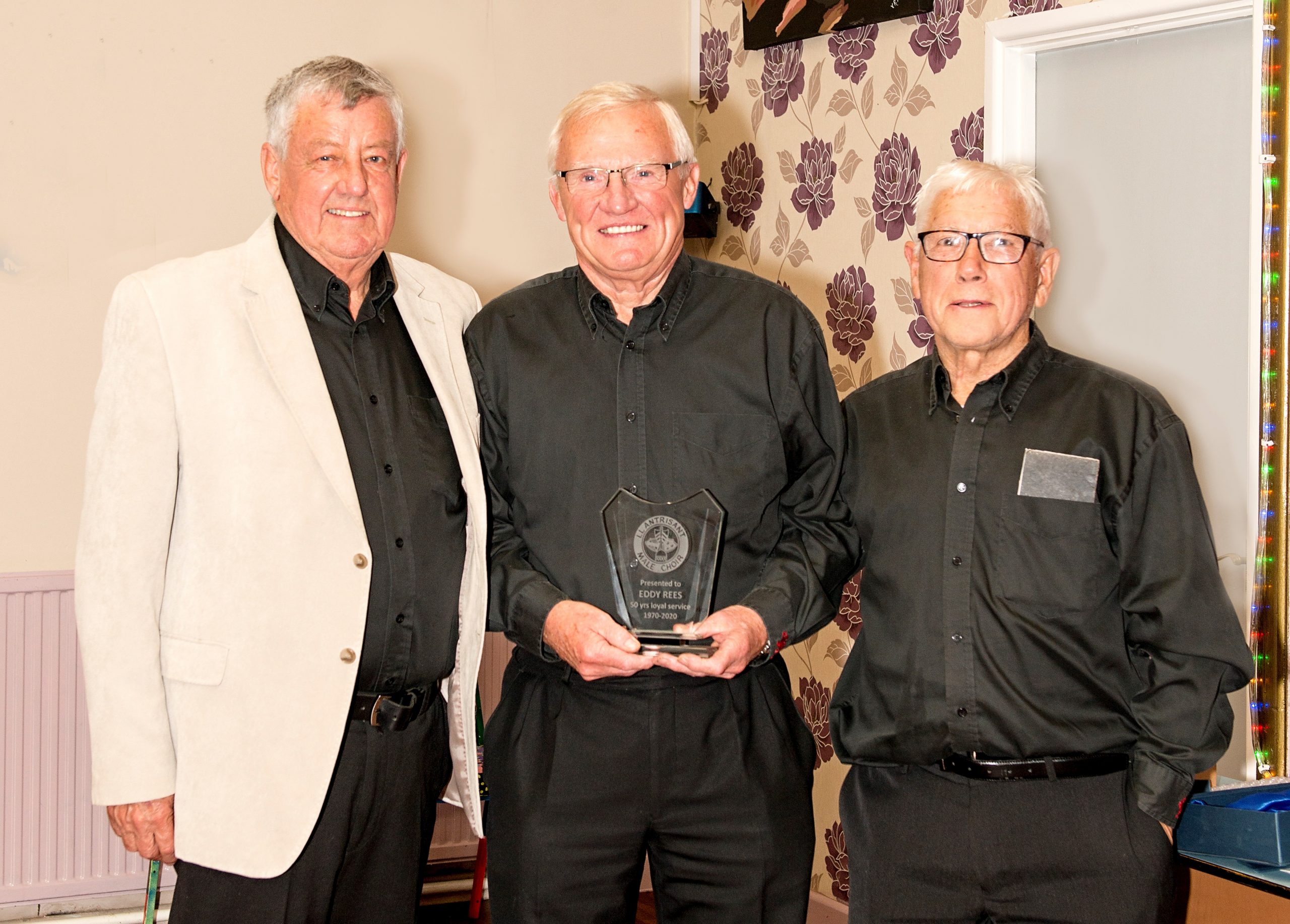 “I was born in Pendoylan in 1951, moving to Church Village in 1956 and then to Pontyclun in 1966. I attended Bryncelynog School, Beddau and later moved to The Bishop of Llandaff School in Cardiff.

I have now lived in Talbot Green for 42 years with my wife Marion of 47 years. I am grateful to the choir for singing at both my daughter’s weddings.

I was brought up in a family of music with my mother being one of the local piano teachers.  Unfortunately I didn’t follow in her footsteps but took up playing the euphonium and became part of the Bryn Celynnog youth brass band and later moving onto the East Glamorgan youth brass band in the 1960s”. 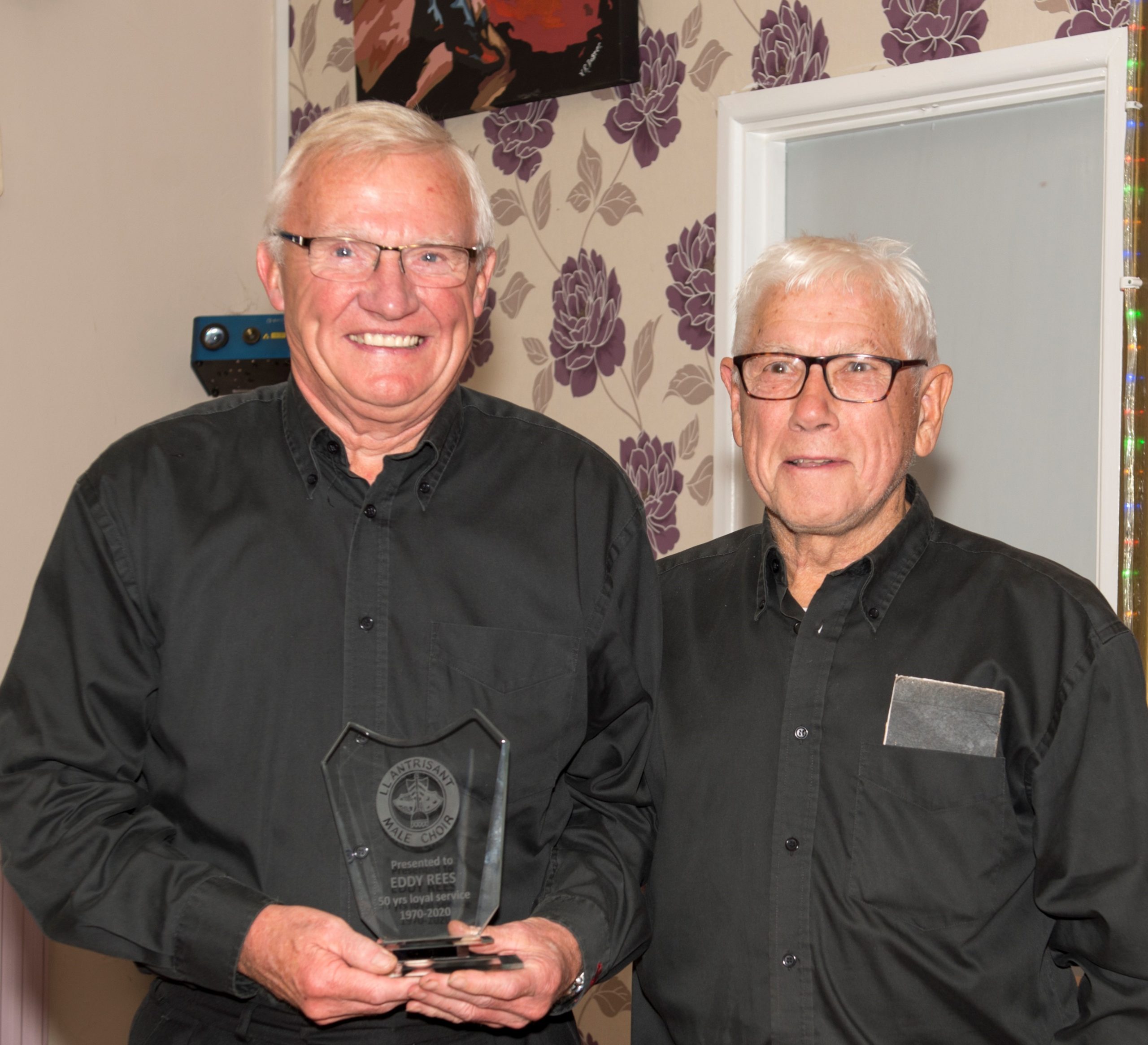 “I started my working life in 1967 by serving an apprenticeship at the Royal Ordnance factory in Cardiff. After completing my apprenticeship in 1971 I moved to working at the BBC Wales Cardiff as a maintenance engineer and remained working there for 47 years until my retirement.

As a young man of 19 years in 1970 I joined Llantrisant Male Choir, in the baritone section, under the baton of the then MD Luther Jones and now after 52 year under the baton of our current MD Matthew Nash.  In that time the choir has seen 10 other MD come and go.

I was presented with the Life Member Award in 1998 and now have the privilege of receiving the award for 50 years of singing.

During my time with the choir I have accompanied them on several tours, s-Hertogenbosch in the Netherlands, Hanover, Cyprus, Bratislava, Krakow and Nürtingen, Germany, that I can bring to mind as well as attending the 1000 voices at the Albert hall on several occasions”. 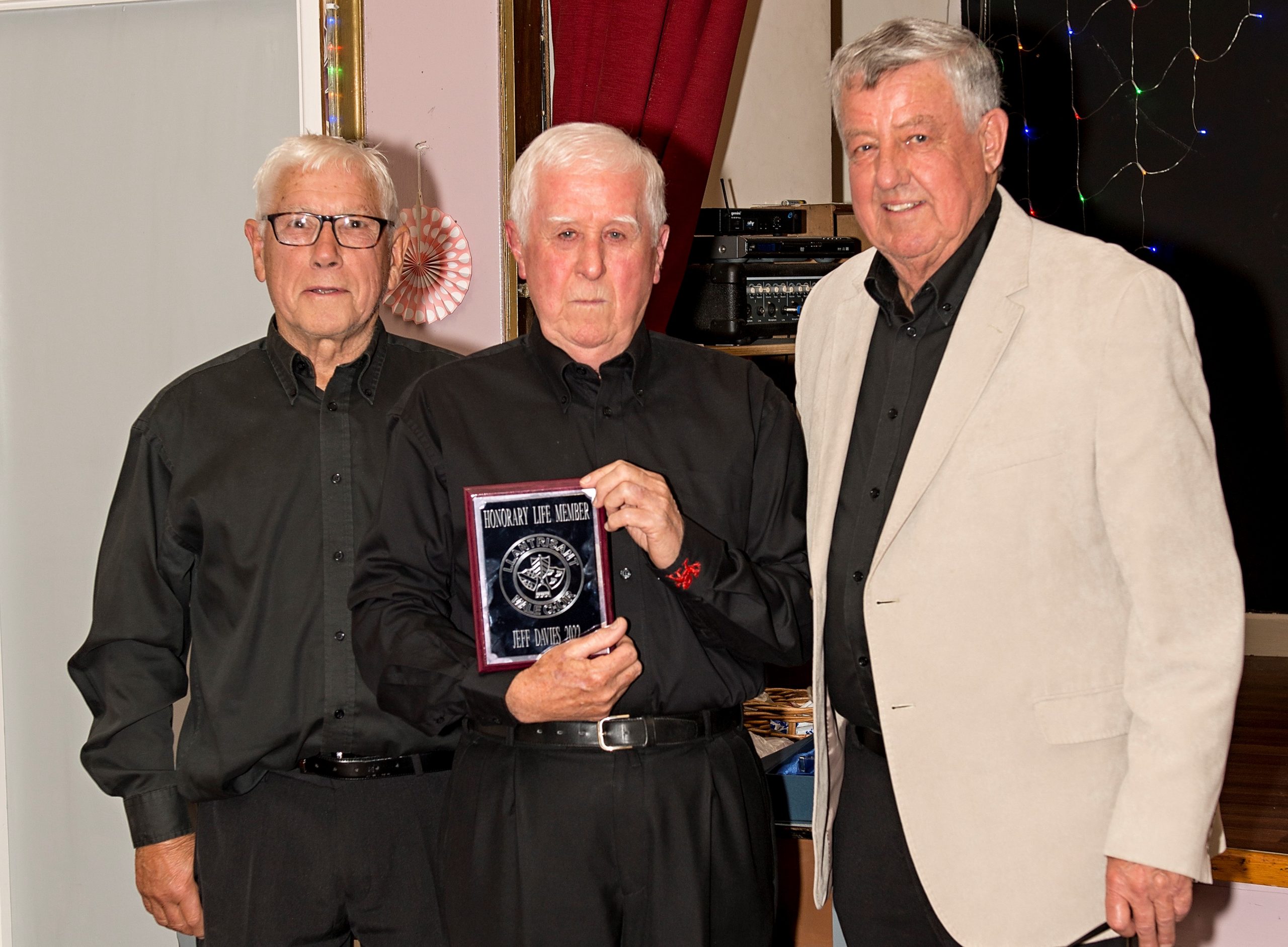 “I was born in 1945 and brought up in Pontyclun. I went to Pontyclun Primary school although on the first day my friend and I decided this was not for us and escaped over the fields, my parents were not amused!

I attended Y Pant Secondary Modern, but didn’t do very well and couldn’t wait to leave. My Headmaster felt the same way and told me not ask for a reference because I would only receive a blank sheet of paper.

I then worked in a factory and a garage both of which were not for me. I then became an apprentice Painter & Decorator on the Llantrisant &  Llantwit Fardre RDC and attended Bridgend Technical College where I passed my City & Guilds.

Married in 1975 to Megan, and have two children who have both done very well in education unlike their father”. 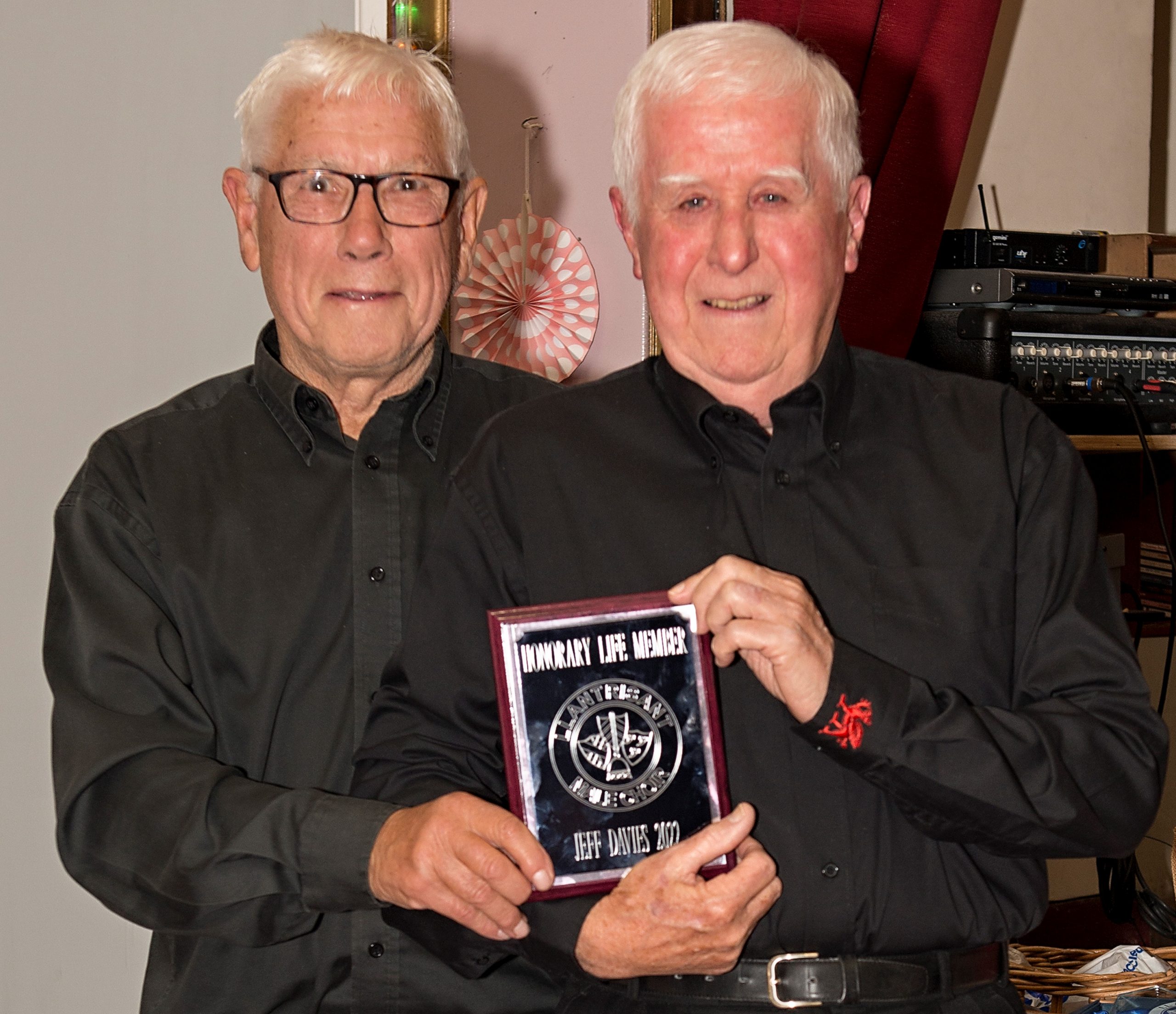 “My father who was a postman and auxiliary fireman sang in Llantrisant Male Voice Choir for 54 years so I was brought up with music both through the Choir and the Methodist Chapel which I attended until I was 16.

After 23 years working for the Council I decided to start my own business as a Painter & Decorator. I managed to make a living and also managed to put my children through University. As they have both done very well this makes me very proud.

I joined the Choir in 1997 under the leadership of Mr John Bedoe with Miss Meryn Williams as the accompanist.

I have seen many changes in my 25 years but have always been proud to be a member of the Choir, and have been to many different Countries including a trip to Australia & New Zealand with the Welsh Association of Male Choirs and made marvellous friends along the way.

I must also thank my wife Megan, for her understanding of the commitment needed to be in a Choir. Long may it continue”. 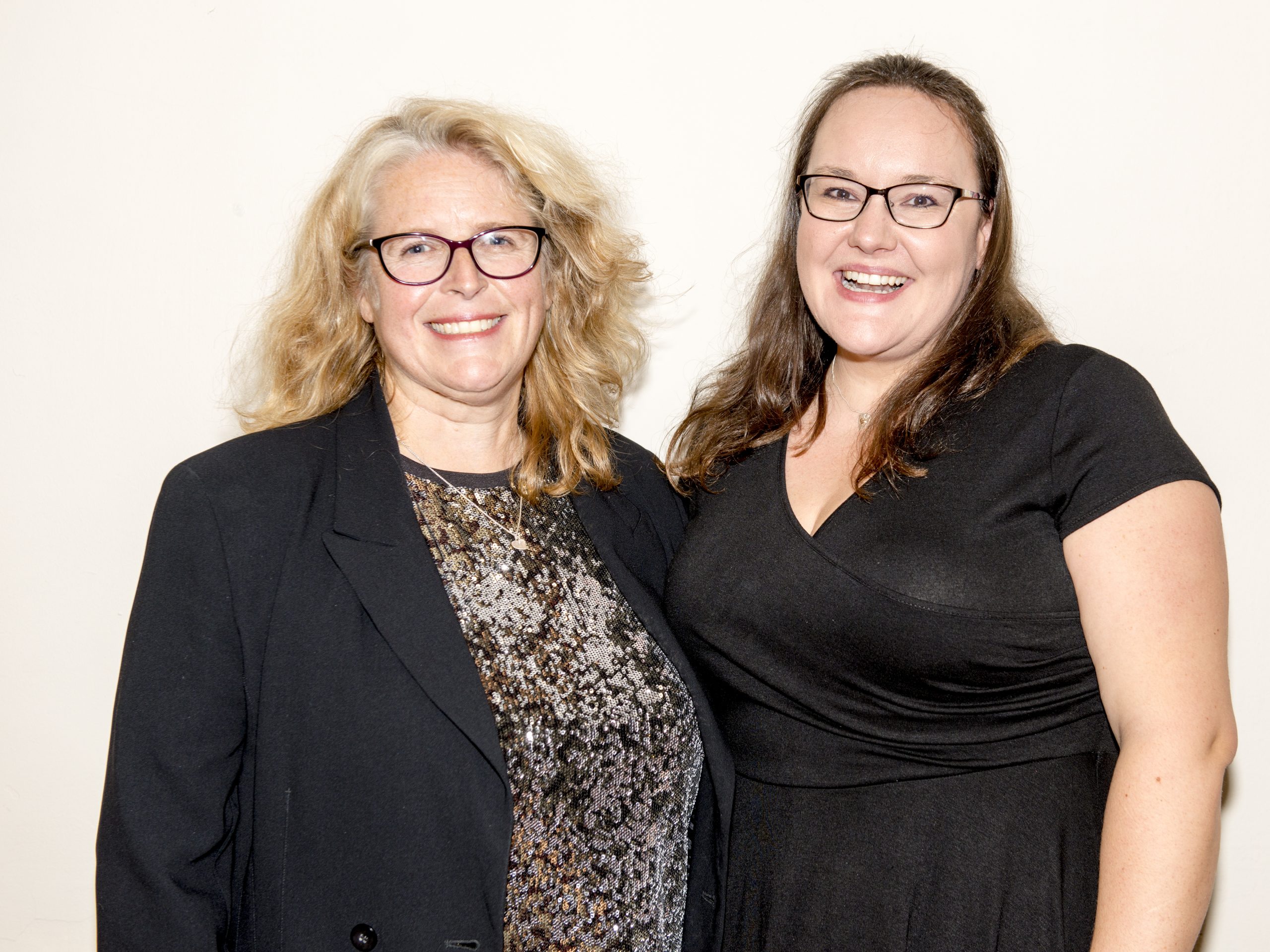 A big thank you to Jane Coles, our Accompanist and to Diane Wright, standing in as Conductor for the evening. 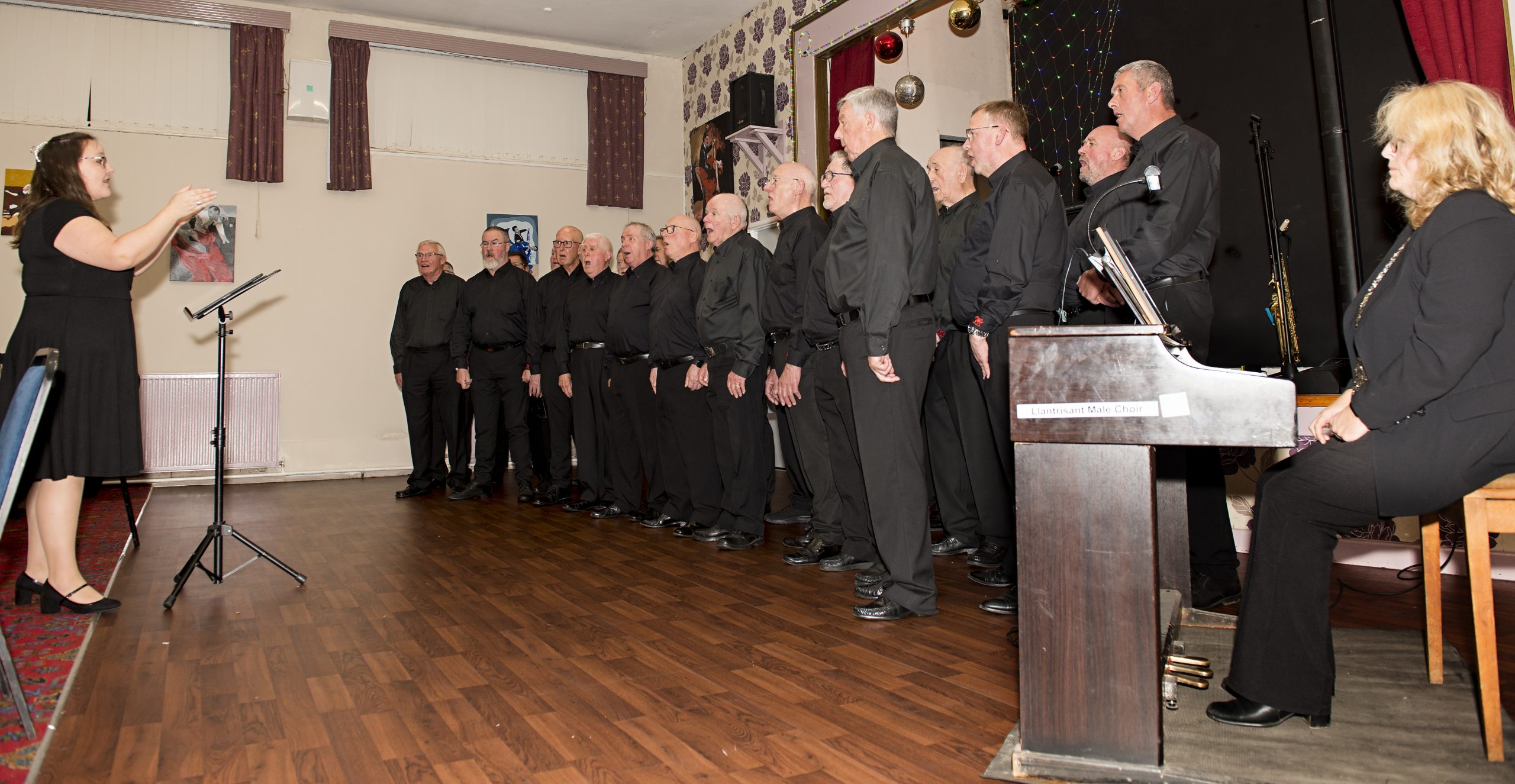 A variety of traditional and contemporary songs, enjoyed by all who attended included, Anthem, Bring him Home, Gwahoddiad, My Way, Llef, Myfanwy, Yma O Hyd, American Trilogy and  Amarillo. 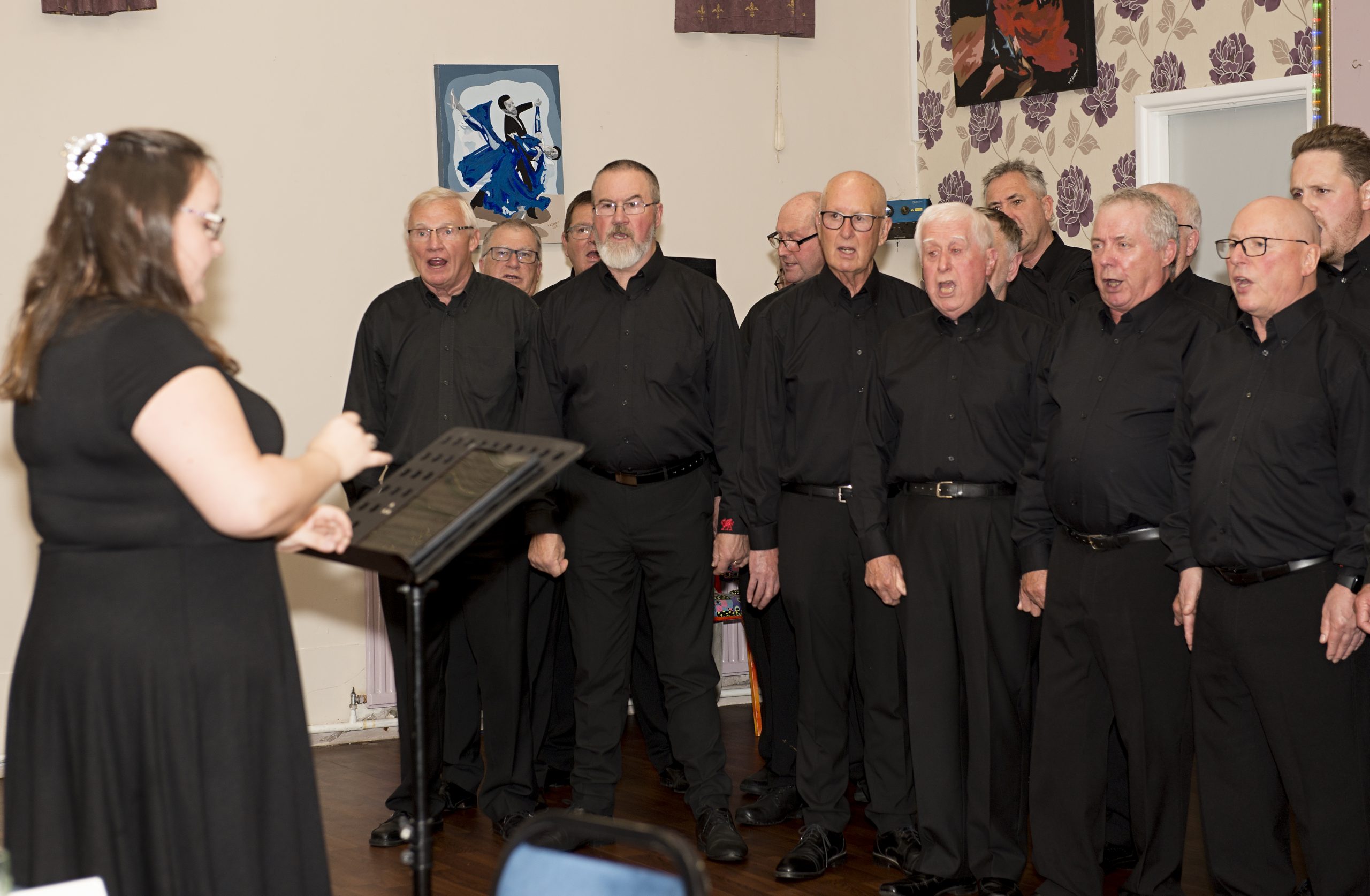 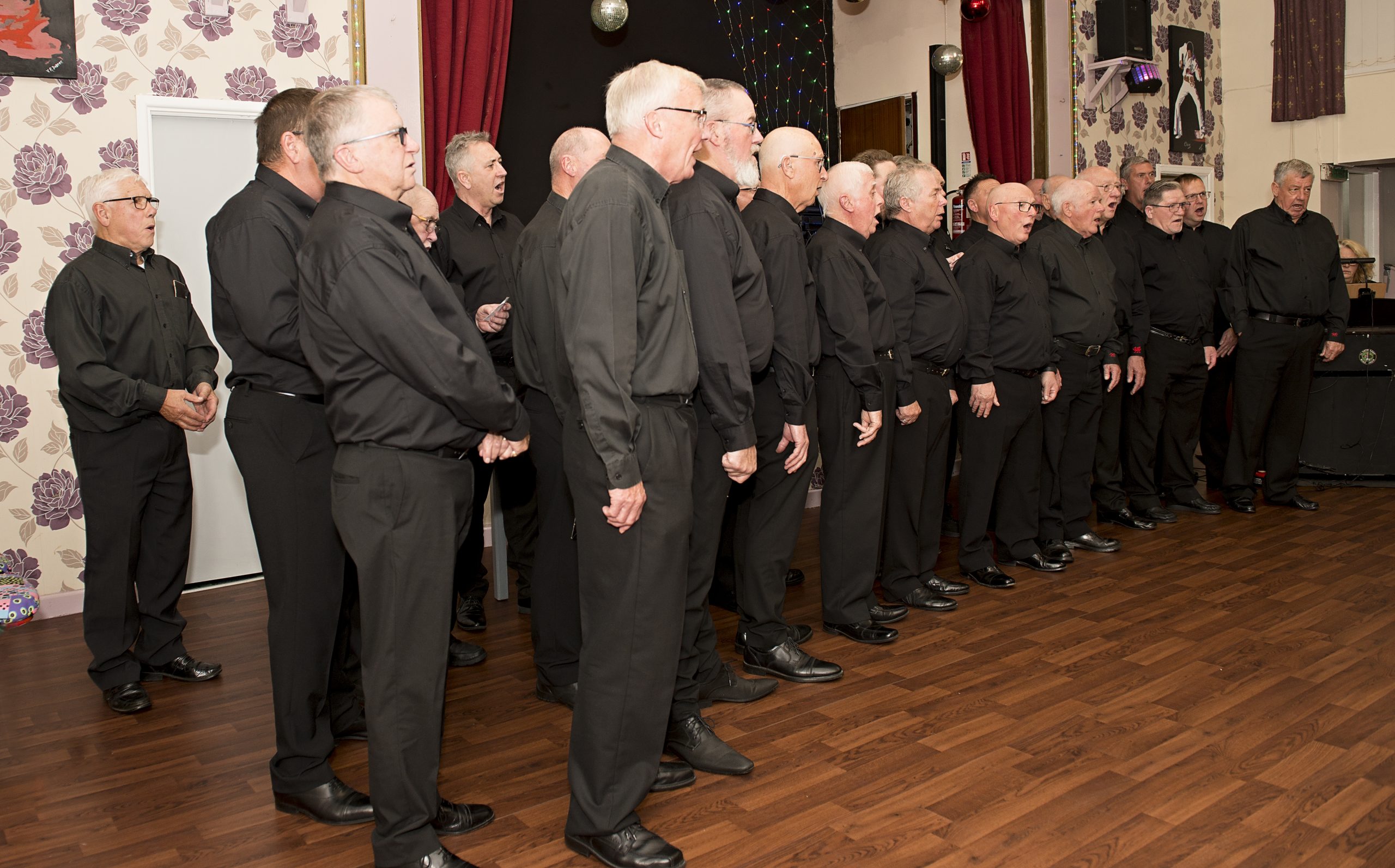 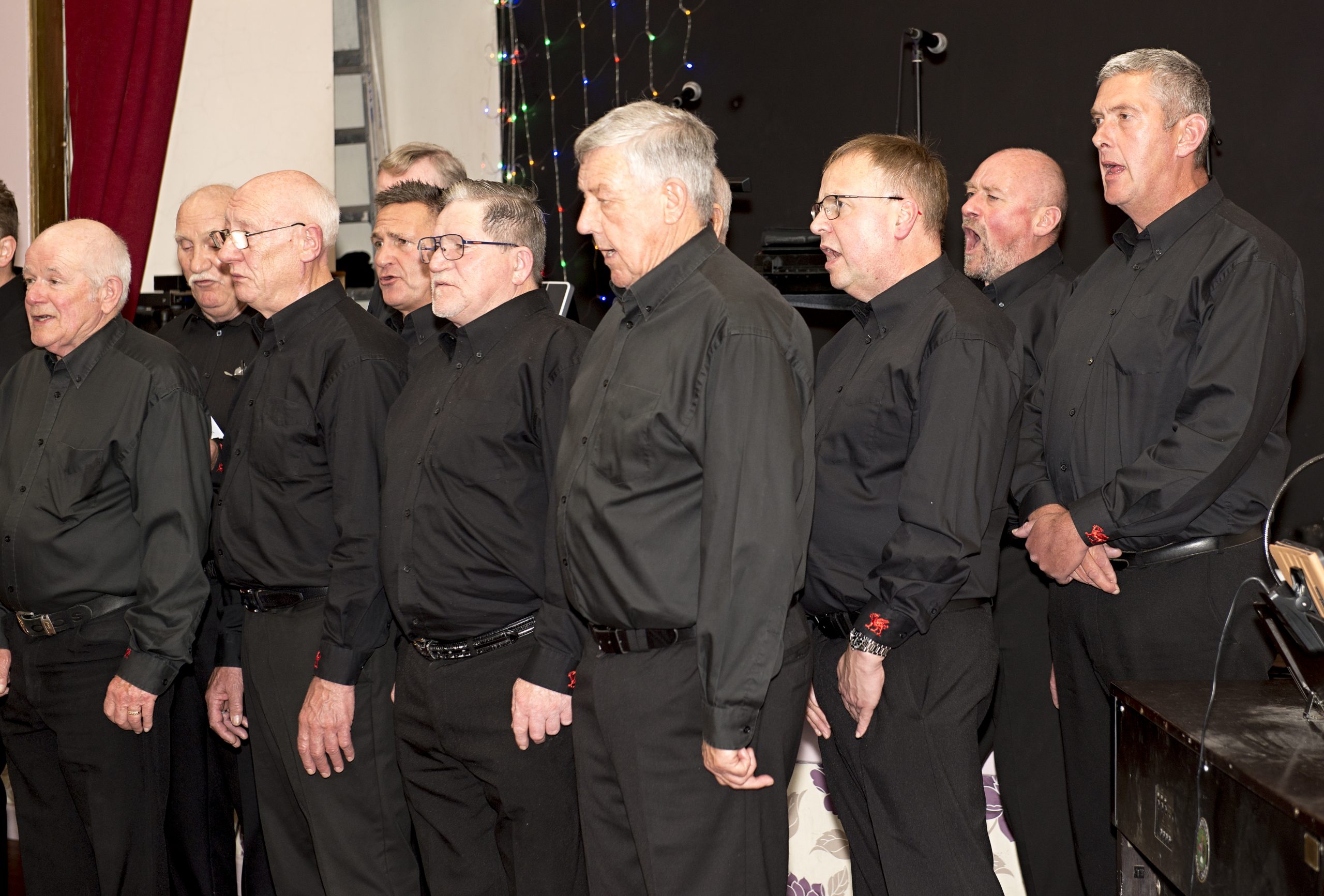 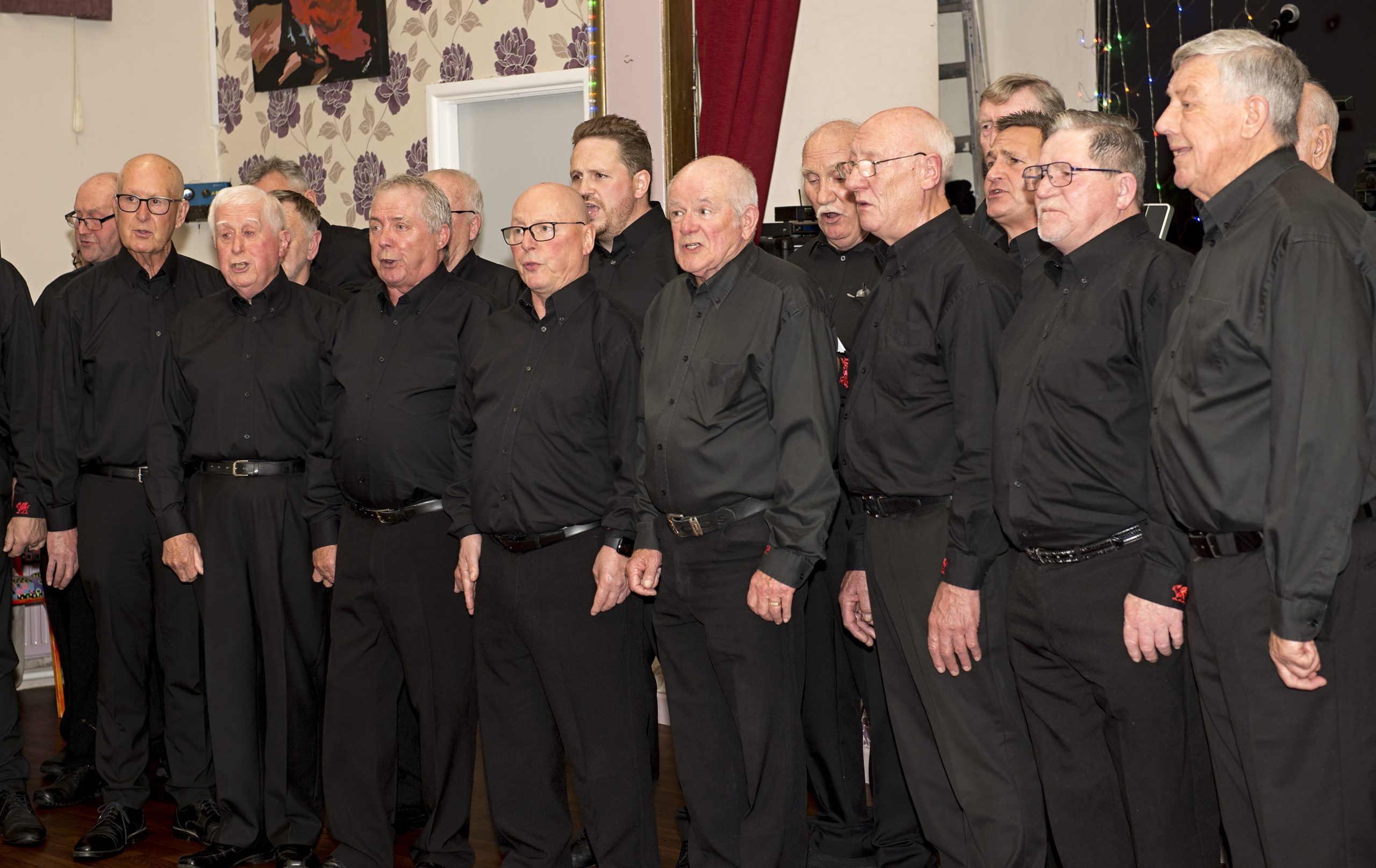